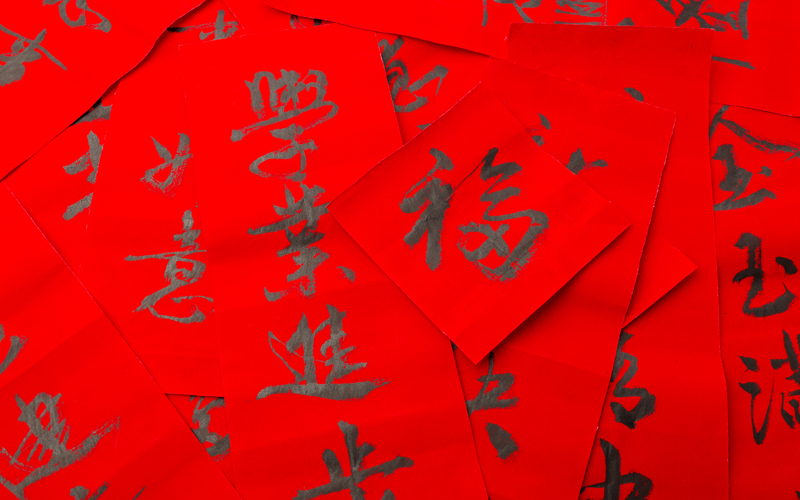 Fai Chun is a traditional decoration that people would stick on the door of their homes or work places during Chinese New Year. Do you actually know what the point of Fai Chun is? Do you understand what is written on the Fai Chun? Now, its time to explore it!

The auspicious words of the New Year are written on a red rectangular paper with beautiful calligraphy.

Fai Chun symbolizes good luck and prosperity. When Fai Chun is stick on a person’s door, good fortune will come to their places. Fai Chun first appeared during Northern and Southern dynasties (420 – 589) as TaoFu. TaoFu was used by folks to drive ghosts away during Chinese New Year by drawing the face of Gods on the wood in ancient times. From the ancient Chinese mythology, there was a huge peach tree located in the East of China Sea, and there were Gods and stagnations under it. Some troublesome ghosts would tie them up to feed the tiger. Therefore, people started writing auspicious sentences on the TaoFu to drive them away.

Besides from the usual rectangular Fai Chun, there is also a square Fai Chun with a “福” (pronounced as “Fu” in mandarin) written or printed on it. Fu means “fortune”. It is very common to see someone’s front door with the Fu Fai Chun. There is also a certain method of displaying that Fai Chun. Most people would display it upside-down instead. I could not figure out why people like displaying it upside-down until my mom told me it actually has a meaning of “Good luck arrives”.